The Dangerous Streets of London 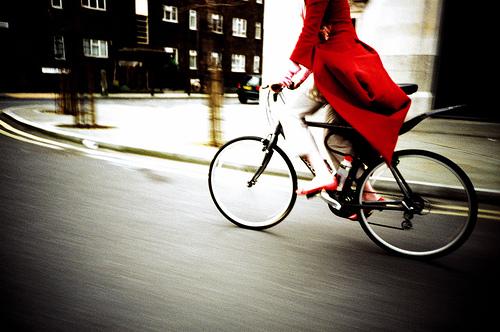 I have just started cycling a longer and more inconvenient route across London. It consists of being threatened and squashed to the curb by cars, motorbikes, buses, taxis and most alarmingly – big smokey lorries. As I wait for the adrenalin to wear off after I arrive at my destination, I am thankful that made it there alive again . My route largely consists of cycling along the top of Hyde Park and through the leafy streets of West London. It sounds quite nice in theory really, however there are no bike paths and lots of insane drivers. Many people, especially my family have told me that cycling in London is crazy and ridiculous. All I can say is that I cannot afford public transport, I don’t have the money and I don’t have the time to wait for a horrifically crowded bus or train that may or may not be late. The experience of public transport is so unpleasant and expensive that risking my life daily seems like a favourable and convenient option. 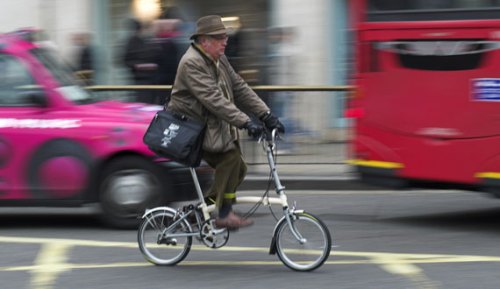 Having partly grown up in Germany I know that cycling does not need to be a life threatening experience. When I look at London with all it’s problems of chaotic and crowded transport options, congestion and air pollution. I simply cannot believe that cycling is not being welcomed and promoted as a possible solution to alleviating these problems. When I talk to many Londoners they say that they would love to cycle but they are simply to scared. I don’t blame them. It took me 3 years to pluck up the courage to cycle in London and I started slowly. I began cycling only in the suburban areas on cycle super highways close to where I lived at the time. I gradually progressed to cycling in East london where I moved to. I then found myself with no money and was forced to cycle everywhere as I preferred to spend the little cash I had on food. 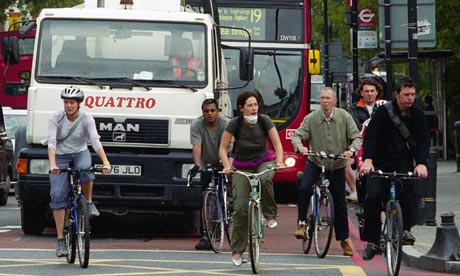 The mayoral election seems give Londoners a perfect opportunity to pressure the candidates for change in road safety. For me the daily fear for my life because of the unneccessarily terrible conditions for cyclists in London. A city dominated by cars, when the majority of Londoners don’t even own one. They have an adverse effect on air quality, noise and living standards. Road safety is not just an issue for people with a bike, it is an issue for pedestrians especially children, communities and our health. When politicians talk about crime, they should also consider those injured or killed as a result of badly designed roads and ineffective transport policies. If the candidates can address road safety as an important issue, cycling conditions could be improved by promoting better planning and more cycle paths. Encouraging more Londoners to cycle could be such a positive thing in many different ways, but primarily cycling gives people an independence in such a large city that other modes of transport do not.

A Legal Debate in a Public Space: An Evening at St Paul’s

On Monday I went to a law debate at tent city in Occupy London Stock Exchange (LSX) camp outside St Paul’s cathedral. I had been there more frequently in the autumn, when the weather was milder and I had more time to go to free lectures and engage with people. When I arrived on my bicycle, I encountered a large number of Mercedes and scarily underweight individuals, I was starting to wonder what had happened to the camp. I soon realised that these were the remnants of a London Fashion Week event taking place a couple of yards from the camp. To my relief ‘tent city’ the small tent reserved for debates and lectures was still standing outside St Paul’s cathedral.

After a poem about the law and various disagreements among the occupiers being  about neither “left wing” nor a “political movement”, the debate proceeded. Tom Wolfe (barrister at Matrix Chambers), Sarah Sackman (barrister at Francis Taylor Building)  and Conor Gearty (Professor of human rights at LSE)  stressed the importance of civil action in changing/progressing the law.  The speakers stressed the importance of engaging people in a discussion about social change. Conor Gearty stated that without public spaces it’s impossible to form a protest movement such as Occupy. 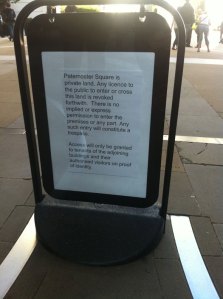 The St Paul’s camp was served with an eviction notice on Thursday, but the protesters claim the  movement is far from over. Occupy London has opened a wider debate on issues of equality, transparency and particularly property. Paternoster Square next to St Paul’s Cathedral, was the original destination of the protesters as it houses the London Stock Exchange. The piazza was off limits for the protesters as it is privately owned. It had been formerly described as a public space, but as soon as the protesters attempted to move in a sign was put up saying ‘private property’. As public spaces become increasingly privately owned, the owners of these areas can be more selective about which members of the public they allow to use the land.

The ownership of property is so fundmentally important in our culture that it is key to the way we save and spend money. Conor Gearty stated that the right to property was the single most valued right in our culture. Renting property makes little financial sense especially in London, but the high prices of property and proportionately low incomes prevent many people from buying property. Professional landlords who own numerous properties often exploit the situation, and limited tenants rights largely favour the landlords position. 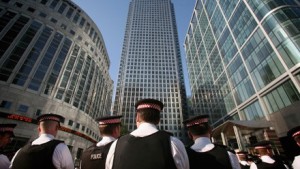 Sarah Sackman stressed the problems of privatisation of public spaces and policing in places such as Canary Wharf. These privately owned areas often exclude members of the public and are run by their own rules, making the use of these spaces subject to their discretion and approval. Public spaces are one of the few areas that allow people to congregate and express themselves freely,  they are essential for communities in densely populated areas such as London. Their decline is particularly worrying at a time where community centres and youth clubs have closed down and when for many people there are not many places to go. Young people need spaces they can use for recreational purposes, without being asked to move elsewhere because they may not fit the profile, or because their presence is unnerving for the landowners. 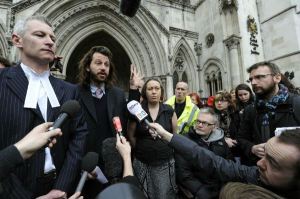 Occupy London barrister Michael Paget and defendants George Barda and Tammy Samede from the Occupy St Paul's camp outside the Royal Courts of Justice in London on February 22, 2012.

The  eviction of St Paul’s protesters raises issues regarding the accountability of the City of London Corporation as well as the ethical implications of privatising public spaces. It also raises issues relating to segregation and selective use of this space. Gated communities, areas such as Broadgate and Canary Wharf and private parks are features that add to the equality issues in London. Such inequality and exclusive land use is damaging for all sections of society. Public spaces are there to be enjoyed by all members of society, without public spaces it would be impossible to effectively exercise basic rights such as freedom of expression and assembly. It is key to recognise that it is the right of individuals to voice their opinions, it is their right to create a civil rights movement and to attempt to induce progressive changes in the law. Without public pressure, the law would have difficulty in moving forward and embracing reform. It appears that the most valuable thing that Occupy London has created is  a platform for debate and engaging in dialogue. Waking up public interest in politics and social issues and giving people a voice is hugely significant and reflective of our society.