Should Government Intervene in the Judicial Process? — Home Secretary criticises judges on application of right to family life 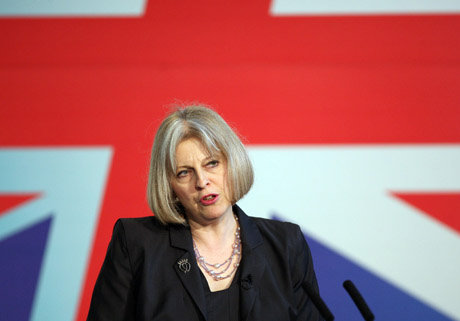 Theresa May stated today that judges must follow stricter rules on the application of human rights laws in relation to immigration and deportation of criminals. She also claimed that Article 8 of the European Convention on Human Rights (ECHR) – the right to family life, is not an absolute right and must be weighed up against public interest. The cross government agreement approved by Ken Clarke encourages judges to interpret Article 8 in a way that would put the state before the right to family life.

On the BBC’s Andrew Marr show the Home Secretary revealed plans to tighten immigration laws and to prevent criminals using Article 8 to avoid deportation.  The UK is introducing “financial independence” rules which will make it more difficult for tens of thousands of families to bring relatives into Britain. When the measures come into force next month, individuals must earn at least £18,600 to bring in a non-EU  spouse into the UK and additional income for each child. May is emphasising that this will prevent foreign partners from “relying on benefits” for when they settle in the UK. She claims that these moves seek to largely reduce net migration as well as ensuring integration and economic independence of immigrants.

She also referred to plans to introduce “Britishness tests” which will consist of English language as well as a “life in the UK” tests. Marr pointed out the challenges that may arise in relation to Article 8 ECHR, however May argued that states have the ability to “qualify” the right to family life i.e. apply their own interpretation. She argued that the courts have not been correctly qualifying that right “not even in the way stated by the Convention”. Ultimately she is pressuring judges to enforce more stringent legal controls on the immigration of relatives of British residents as well as making it easier to deport foreign criminals.

The Home Secretary stated that she will outline the rules and guidelines in qualifying the right in the courts. “[I am going to] set out the rules that say this is what parliament, this is what the public, believe is how you balance the public interest against the individual’s interest” According to May the ECtHR has actually been tougher than some English courts in this area, she claimed that in many European cases judges differentiate between a foreign nationals who have been in the country illegally  or legally.

Her proposal for tighter rules emphasises the governments view that the right to family life doesn’t necessarily take precendence over other factors. The government plans to introduce legislation if the judges do not follow the motion set out by the Commons. She warned: “I would expect that judges will look at what parliament will say and that they will take into account what parliament has said. If they don’t then we will have to look at other measures and that could include primary legislation.”

It is unclear how exactly the government is to assess whether or not judges have taken on board the government’s wishes. For May to publicly criticise the work of judges for not being in line with the governments policies seems a  little worrying as surely judges should be expected to act within the framework of the law rather than according to the interests of the government. Lawyers have stated that implementing legislation to amend the human rights act or to change its proper application would most likely be contrary to the convention.

Critics have argued that it is not the job of Parliament to interpret the law but that of the judges. May’s comments on the Marr show could be seen to be labelling immigrants as benefit scroungers or criminals who are abusing human rights laws such as Article 8 in order to stay in the country. The governments intervention on the current approach taken by judges seems both unnecessary and inappropriate. While many judges inevitably reflect public opinion to a degree they should primarily base their judgments on the law. Government has no place to enforce their political agenda onto court decisions, and judges should act in the public interest to uphold a fair and legitimate legal system that upholds human rights.